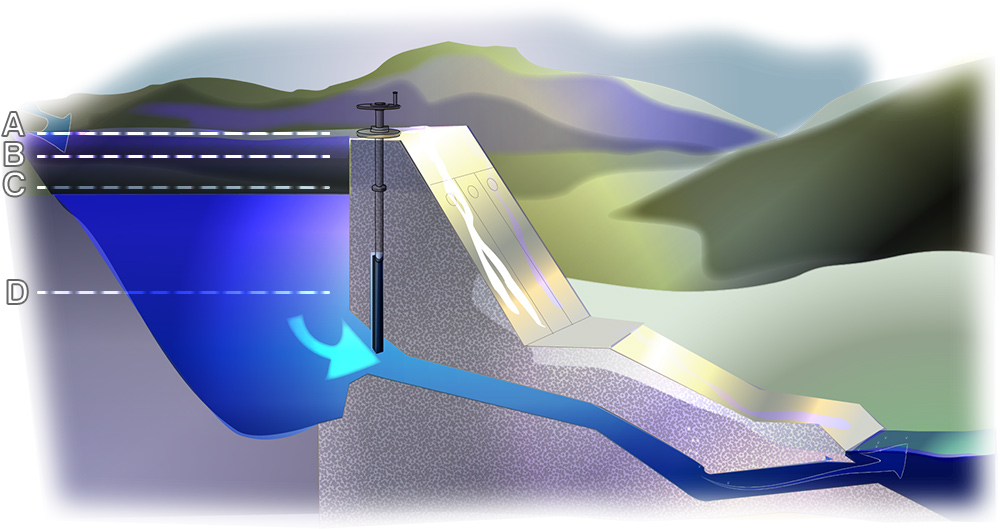 the inflow at A denotes births and immigration

The reservoir and dam represent the habitat in which the deer live.

At level “D” numbers are low and habitat resources are abundant, consequently deer mortality is low and recruitment is high. Habitat and deer condition are both good.

As the population rises towards level “B” competition between individuals and habitat impact increases, but at level “B”, the “sustainable carrying capacity” (SCC), the habitat can sustain the deer in good condition throughout the year without further degradation.

If the population reaches “A” ,the “absolute carrying capacity” (ACC), there will be lower recruitment, higher mortality and generally poorer body condition. Emigration/range expansion may increase if the surrounding area is not already saturated. There will be significant impact to the habitat and the original carrying capacity may be reduced (equivalent to the top of the dam wall being eroded).

The aim of this guide is to illustrate how deer population numbers and structure can vary over time. This guide is linked to the Management Plans, Cull Planning and Population Modelling guides which should be considered essential companion reading.

habitat = the land to which a population of deer has access this might comprise a mixture of woodland/forest, farmland, moorland, and so on.
impact = the effect, through browsing/grazing, and other behaviour, that deer have on their habitat, including effects on other species reliant on the habitat, and on human interests such as deer vehicle collisions and crop damage. Note that impacts can be both positive and negative and in some cases neutral depending on human objectives.

The way that the numbers and structure of an animal population vary over time, and the factors which cause variations, are described by population dynamics.
In the case of deer the size of the population changes in response to a number of factors as illustrated in Fig. 1.
Most deer populations, in the absence of significant predators (as in Ireland), and if not culled adequately, have a tendency to grow over time towards level “A”. The rate of growth of an unmanaged population in favourable conditions and with an even sex ratio, can be between 15 and 30 percent per annum. If there are more females than males (as is often the case) the rate of growth can be considerably greater.

Usually deer populations should not be allowed to reach the absolute carrying capacity, it is not likely to be good for the deer or their habitat. This implies that most deer populations require some management to hold them at least at the SCC. Human interests (e.g. preventing damage to crops or sensitive habitats) may dictate a further reduction to a “managed carrying capacity” (MCC), the range of which is indicate by levels D and B in fig. 2. The actual level will be determined by management objectives, see also the Cull Planning guide.

Currently the only practical method of manipulating population numbers is to cull (increase the “outflow”) and in particular to ensure a sufficient cull of female deer, since they are responsible for the majority of the “inflow”. See the Cull Planning guide.

If there are multiple objectives in one area then priorities will have to be set and compromises made.

If more than one deer species are present management objectives for each species may vary.
Where neighbours have widely different objectives in managing deer, attempts should be made at resolving differences (see the Cross Boundary Liaison guide). 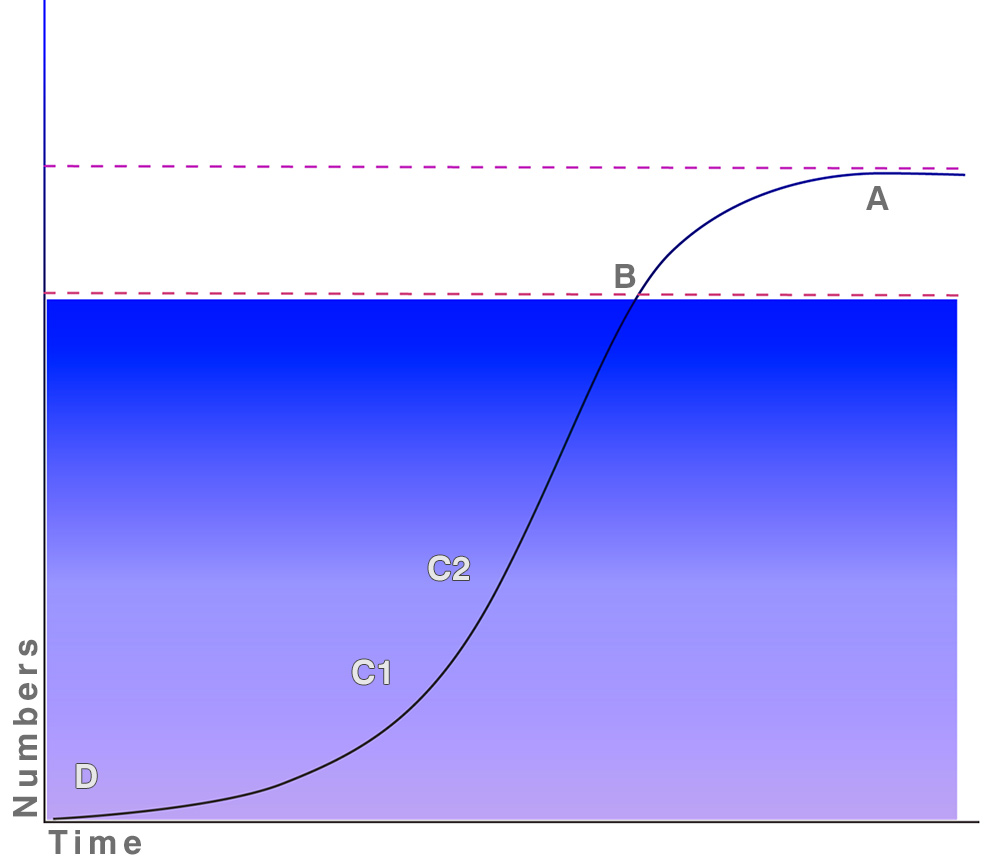 Management should aim to keep deer numbers below the SCC at a managed carrying capacity, the level of which depends on objectives.  Changes in a deer population where “inflow” exceeds “outflow” e.g. an unmanaged population or where numbers culled are less than recruitment.
The solid black line shows how deer numbers increase if management is insufficient to prevent a rise in population. The shape of the curve depends on the deer species, the factors affecting recruitment and natural mortality and the degree of culling. Culling can hold the population at points along the curve as illustrated by the examples in Table 1 below. See also the Cull Planning guide.