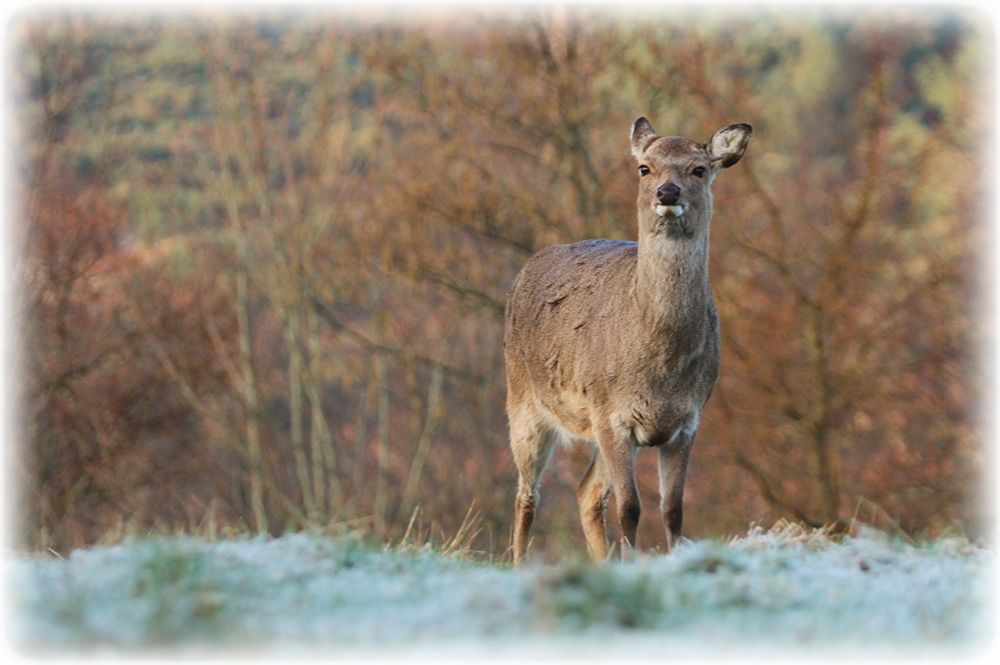 A sound knowledge of deer behaviour is essential for the efficient management of deer.
This guide describes features of deer behaviour which are more or less common to Irish deer species (see Species guides for behaviour specific to each), but each species is different, deer are very adaptable, and their behaviour can vary widely with habitat, deer density, and human disturbance.
This guide links to: Deer Species, Deer Signs and Deer Biology guides. 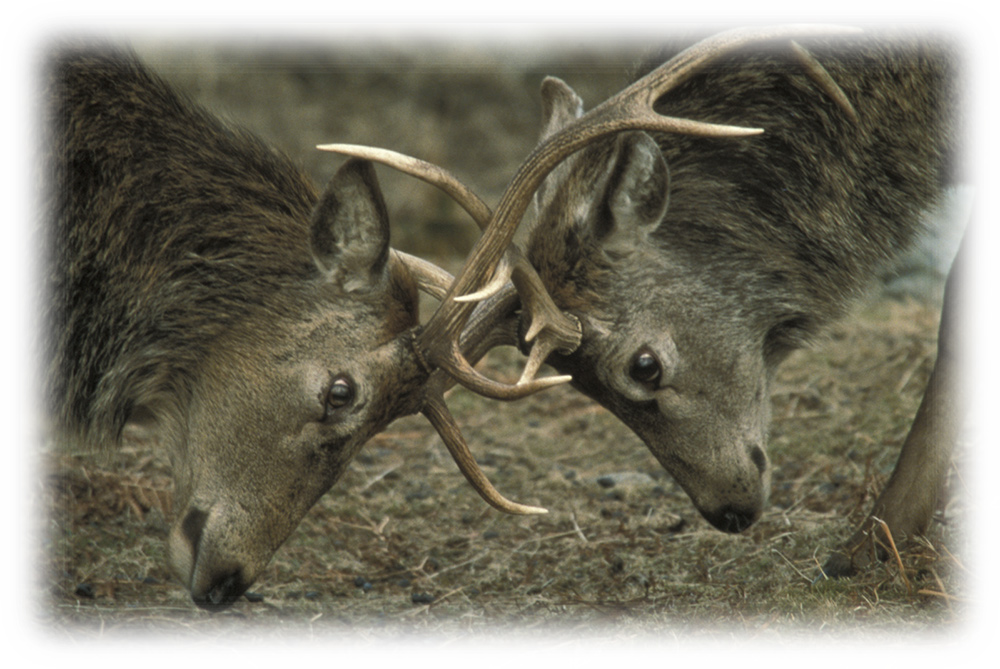 Deer are usually found in or near to forest/woodland/scrub and frequently feed on grass or arable land near to cover. Some species are content to live on open areas of heath or moorland. Deer are very adaptable and may be seen in peri-urban or urban situations or other places where there is cover and a food source, they can have marked preferences for different habitats according to deer species, habitat type, the time of year or weather conditions.

Deer may form herds or act in a more solitary manner according to species, age and sex.
Solitary deer tend to be territorial, especially the males. Herding animals are more inclined to form groups, members of a herd may often be closely related.
Herds or individuals tend to be “hefted” to an area in which they prefer to live, this tendency is strongest in territorial deer and females of the herding species. The herding deer may have “core areas” sometimes several miles apart, using these at various times of year but rarely being seen on the intervening land.
It may sometimes be possible to identify the home range of a herd, group or individual by sightings and the signs that they leave behind (Deer Signs guide).
The relationship of young deer with adults varies with species, see Table 2.
Where different species live in the same area, they generally live separate lives but there may be passive competition for resources and possibly a degree of aggression. 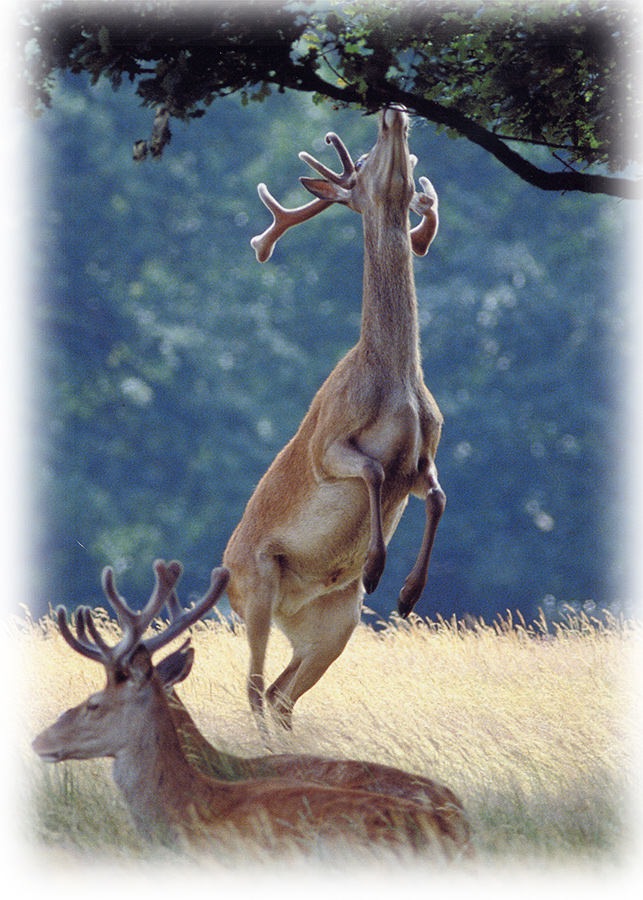 Deer are relatively shy animals which may give the impression that there are fewer around than there actually are. They are alert to danger and will respond quickly, usually by running away and/or seeking cover but sometimes lying up in or running into wide open areas where they can assess threats. Deer can be easy to stress but recover quickly when the threat is removed. One common response to
persistent disturbance is for deer to change their behaviour, e.g. by avoiding busy times/places or becoming nocturnal. This plasticity of behaviour must be taken into account when planning deer management. 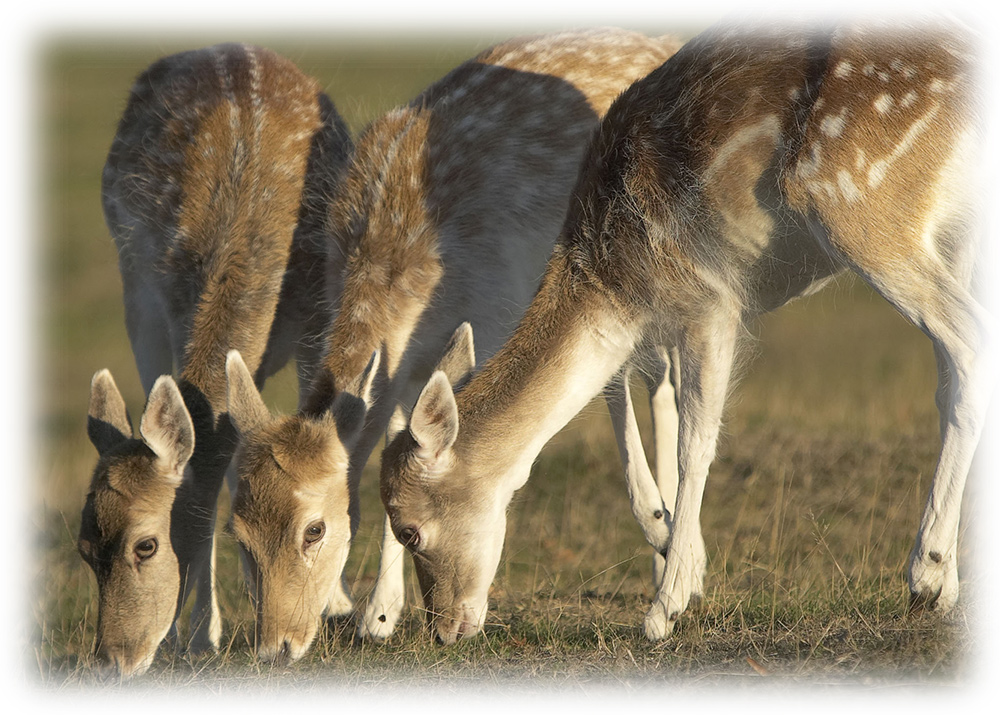 Deer have evolved as prey animals and prefer to spend their time in cover or where they feel secure. With a large rumen( see Deer Biology) they can ingest large quantities of bulky plant food then return to safe areas to lie down (couch) and ruminate(chew the cud). For most species this means that when undisturbed they tend to feed and couch on a 2-4 hourly cycle. Often though, the majority of movement will be at dawn and dusk and sometimes at night.
Deer graze and browse, that is, taking ground-level plants, as well as food from higher shrubby plants and trees. Each species has its own preferences which may vary according to habitat, some are especially selective in their feeding habits. Feeding deer can come into conflict with human interests, in some cases damage by deer to sensitive habitats, crops and even gardens can be serious.
In woodlands, deer at the right density can be of benefit but at high density over a long period they can eat all palatable woodland plants within reach and are forced to range further from woodland to feed. This can bring them into conflict with surrounding landowners and may cause an increase in road accidents. The flora and structure of woodlands can be changed markedly by high deer numbers and such changes may be damaging and long term. 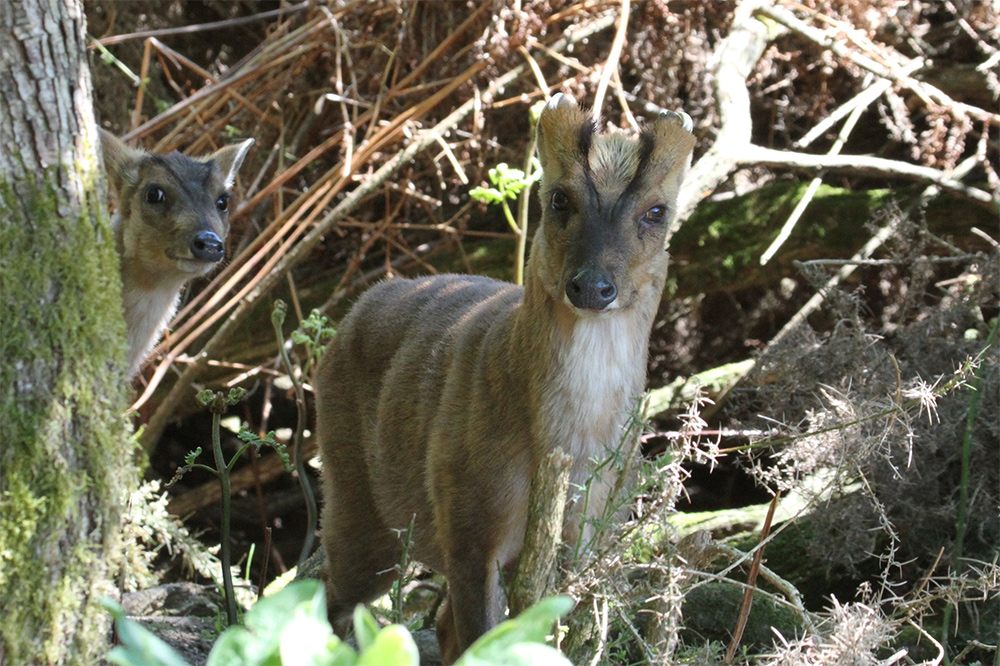 With the exception of Muntjac, which breed all year round, most deer have an annual mating period (“rut”) which varies in timing with species. Around the rut males become more aggressive (sometimes also less timid towards people) and tend to move more outside of their normal range making them unpredictable and more vulnerable to traffic accidents. The larger species may have traditional rutting areas which temporarily become very busy until the rut ends.
Females of herding species often leave the herd to have their young, returning only when the young are strong enough to run with the herd.
For the first few days of life young deer are often left hidden in cover for hours, during which time their mother feeds, then returns to suckle them, this can lead to well-intentioned humans picking them up and disturbing a perfectly natural situation. The best advice is to return the young deer as soon as possible to where it was found, usually its mother will reclaim it. Young deer can be vulnerable when hidden in silage and hay meadows which are due to be cut.

Deer of both sexes can be surprisingly aggressive to each other, this aggression is usually linked to status within the herd or local population and/or competition for food, space and breeding status. Aggression usually takes the form of barging, kicking (sometimes boxing while standing on their hind legs), biting and more subtle facial or vocal expressions.
When antlered males clash the initial stages may be ritualised but fights usually result in the clashing of antlers and strenuous head to head shoving match, the winner is usually the strongest, not necessarily the one with the largest antlers.  Species such as red deer maintain a more or less linear hierarchy where each animal knows its place above and below the next. The usual reaction to humans, dogs or predators is to run, if possible to cover, although cornered deer, males in the rut, or females with young can be very aggressive if threatened. Hand reared deer of both sexes can be very dangerous.

Deer are generally quiet but most have specific alarm calls, calls between mother and young and male calls during the rut, some have female calls when seeking a mate or giving birth. 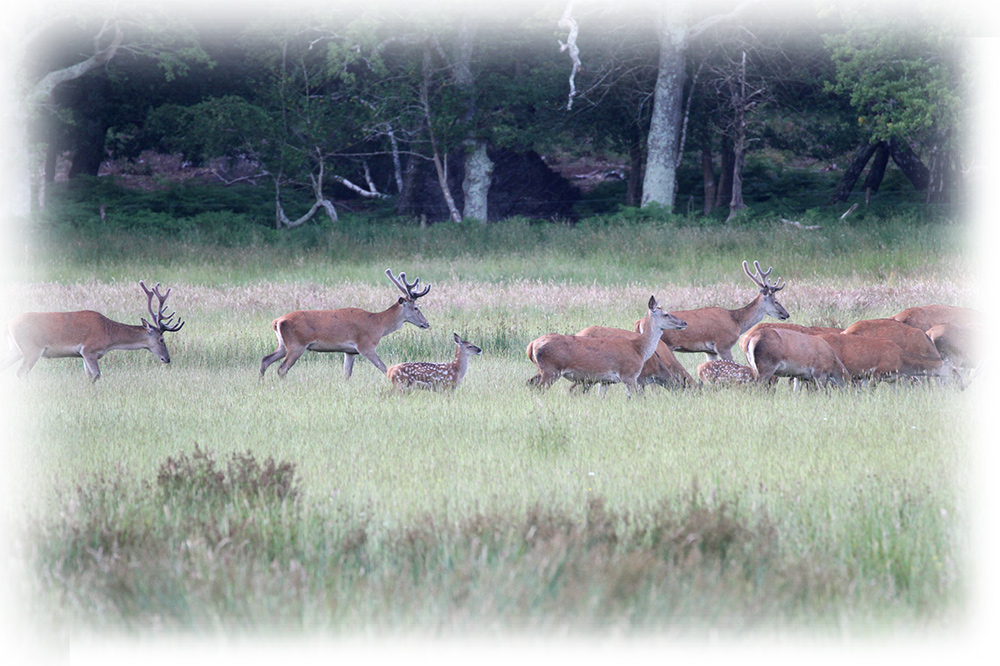 Deer tend to use well-trodden paths known as racks to move within cover and to and from feeding places. Using these and other deer signs it is usually possible to build up a picture of how deer use a habitat.