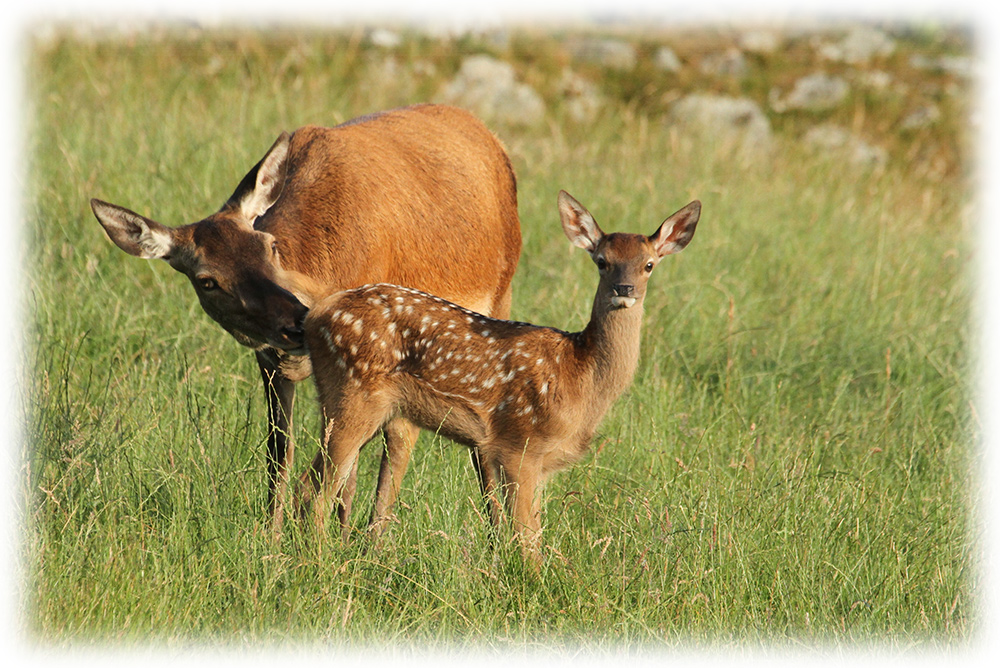 red hind with her calf

The purpose of this guide is to highlight aspects of deer biology that will be most relevant to deer practitioners, managers and landowners. It is not a complete discussion of deer biology for which there are other sources (see Further Info).
This guide links to the following guides: Deer Species, Deer Signs, and Deer Behaviour.

Each species has it’s own characteristic appearance, some have unique features that are visible even in the very young. Size, body shape, detailed colouration and antler shape are useful clues, as are finer details such as facial characteristics and the appearance of the tail area. Aspects of behaviour may also help to differentiate species.
All of our wild species are spotted when young but from 2-5 months of age go into their adult coat which from then on cycles through a biannual change in coat texture and/or colouration. The change from winter to summer coat is the most obvious, changes in colouration can be very marked. Timing is dependent on species and age, younger animals generally changing coat first. Deer hair is hollow (it kinks like a drinking straw when bent), is rather brittle and is easily dislodged. The coat tends to be thicker in the winter and may be surprisingly sparse in summer. Very late coat change may be a sign of underlying illness or injury.

Deer have elongated limbs, the long “canon” bone above the hoof being an extended and fused version of the longer bones in the human hand or foot. Together with a long neck, long legs raise the eye level giving deer a wide visual horizon and a high reach. By standing on their back legs deer can reach even higher to feed.

Deer skulls can be easily distinguished from many other mammals, they have: 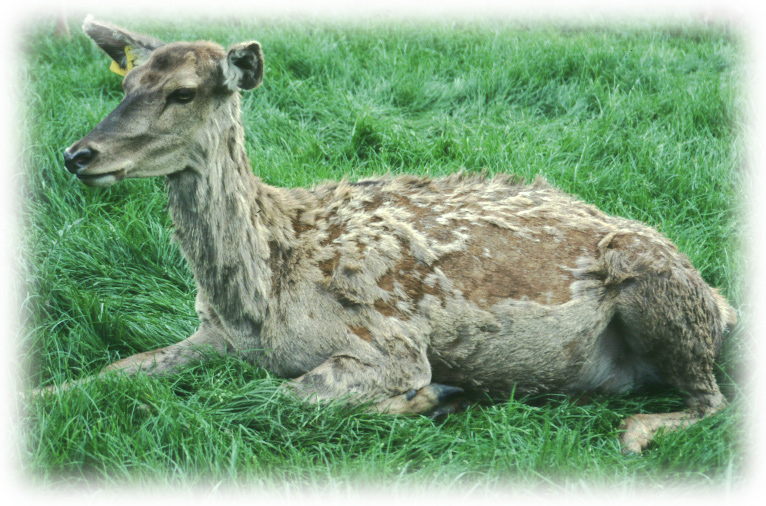 winter to summer coat change is the most obvious 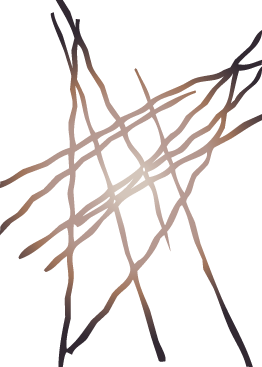 Antlers may sometimes be referred to as the “head” of a male deer. 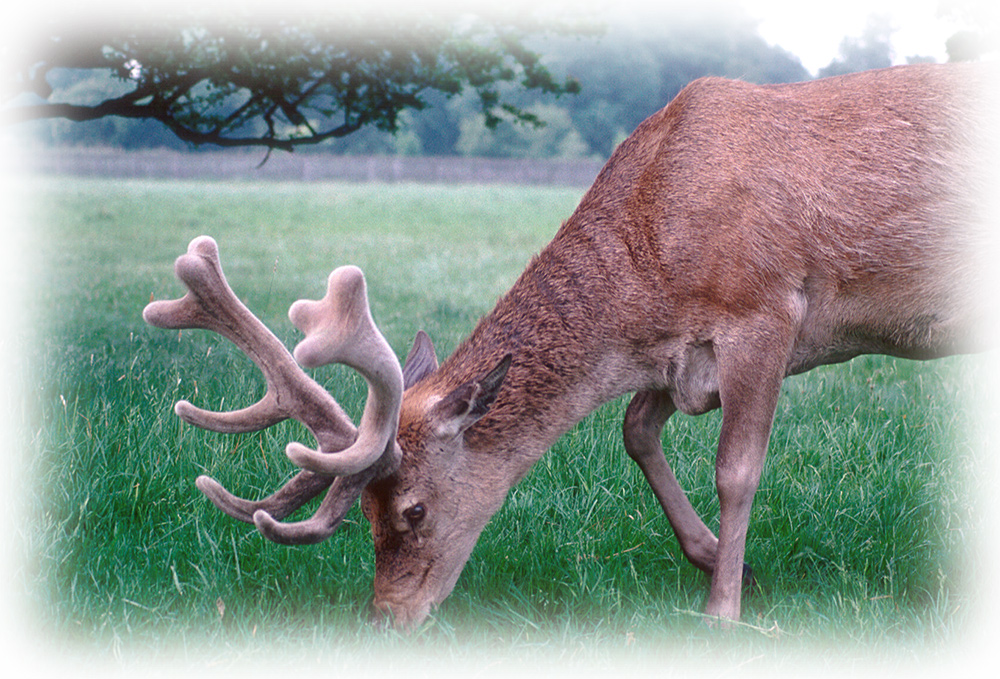 Antlers form on top of pedicles, bony outgrowths which are a permanent part of the skull. Each year new antlers grow under a layer of skin (velvet) which contains blood vessels and nerves. Handling live animals in velvet should be avoided and cutting velvet antlers from live animals is illegal unless for welfare reasons. After 3-4 months growth is complete and the velvet dies and is shed ( at this point the animal is known as being in “tatters”). The hard bone of the fully grown antler, except for the tips, is usually coloured to a dark brown by rubbing the antlers on the ground and on plants. The antlers are retained for a period, then are “cast” (lost) at around the same time annually . Usually the oldest animals in good condition cast earliest.
The antler cycle is controlled by hormones, in particular testosterone, using daylight length as the main external cue which affects testosterone production and hence synchronises growth and casting dates.
Occasionally the supply of testosterone, which is produced by the testes, may be greatly reduced or stop due to illness or accident. If this is permanent, the growing antlers will fail to harden and velvet will not be shed leading to extravagant growth. An animal in this condition has a “perruque” head. The perruque antler mass often becomes fly-blown and infected which may lead to illness or death.
In cases of damage or illness, antlers may show abnormal growth. Provided that the animal recovers and the pedicle was not damaged antlers will often grow normally the following year. Antler growth may reduce in old age, referred to as the antlers “going back”.
The final shape of normal adult antlers varies with species, age, condition and genetics. There may be traits in antler shape and style between related individuals and within populations but these characteristics usually have a relatively low heritability and take a long time to change or be removed. Usually environmental factors have the greatest effect on antler quality and if improving quality is an objective of management it is usually more effective to ensure that males have a plentiful supply of food and shelter and are able to lead relatively stress free lives, a situation not easily achieved in high density populations. Attempting to be highly selective for antler quality is easier in enclosed populations rather than wild ones and least effective in species such as Muntjac. 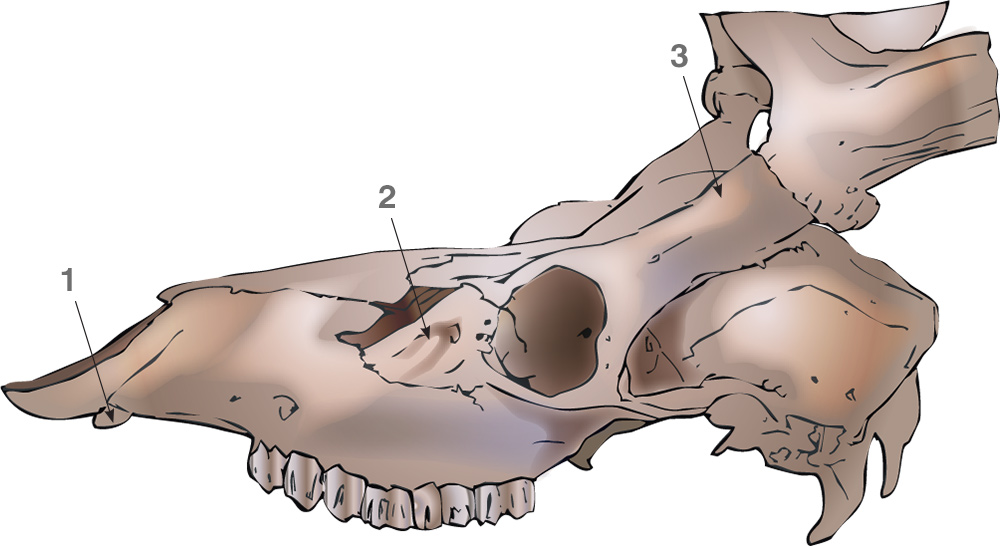 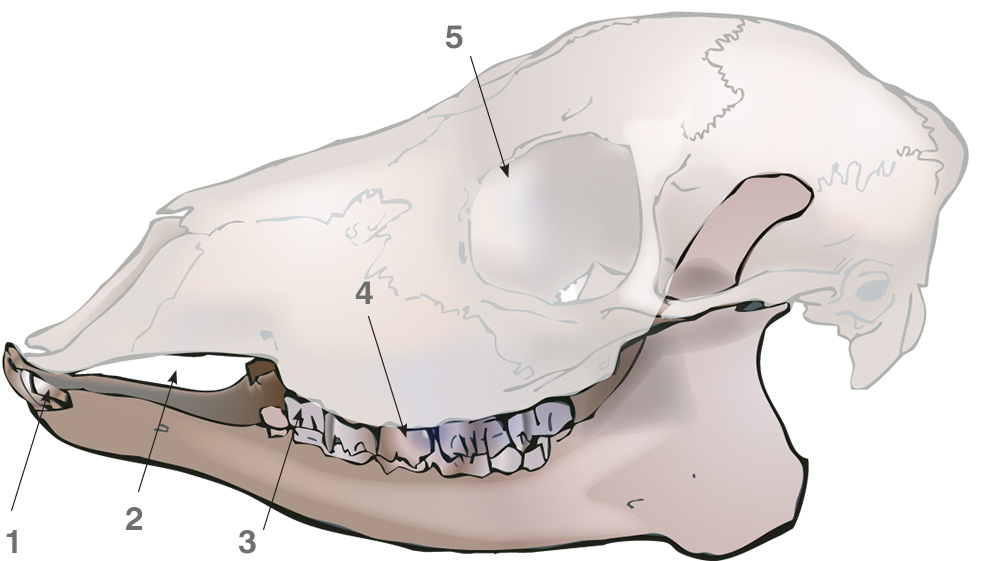 All adult deer possess 12 molar teeth, 12 pre-molar teeth, 2 lower canines which look like incisors, and 6 lower incisors. In addition most species (usually not Fallow) have 2 upper canine teeth, therefore the total number of teeth in adult deer in most species is 34 except for Fallow where it is usually 32.
Deer have no upper incisor teeth, instead the lower incisors bite against a hard pad in the upper jaw. It is this feature that makes fresh deer browsing characteristic, with woody stems being torn away rather than cut cleanly through as they would be by hares or rabbits.
There is a gap in the tooth row between the lower canines and pre-molars known as the diastema. See also Ageing by Teeth guide.

Deer are ruminants and have a digestive system similar to cattle and sheep (but not horses or pigs). The main feature of a ruminant digestive system is a large sac or rumen which is one of the four chambers of the stomach. The rumen contains micro-organisms which help with the initial breakdown of the plant food. The rumen micro-organisms are sensitive to extreme cold and rapid changes of diet, their failure will cause the death of their host.
Deer eat large amounts of bulky plant food in short feeding bouts, hold it in the rumen, then return to a secure place (see Behaviour guide). There the food is regurgitated, chewed for a second time (“ruminating” or “chewing the cud”), returned to the rumen and then into the reticulum and omasum and finally the abomasum which is the equivalent of the human stomach. Food then moves into the small and large intestines to complete digestion. The dung deposited by deer can give some indication of the species present, their density and how they use their habitat.
Deer are somewhat unusual amongst mammals in having no gall bladder.

Seasonal breeders have an annual rut (see Behaviour guide.) Males can be capable of breeding over many months but most matings take place in the rut (July to September according to species). Muntjac breed all year round.
Female deer will come into season repeatedly if they fail to conceive (“polyoestrous” e.g. Red, Fallow, Sika, Muntjac) For these polyoestrous deer young may be born outside of the optimum period and may have a lesser chance of survival or reaching full adult potential. Prior to the rut male deer may change in appearance, developing thickened necks, sometimes with a hairy mane (Red and Sika), changes of colouration, activation of scent glands and a rutting call.
Deer recruitment is geared to withstand predation. Young are born to nearly all healthy adult females in normal years. Annual rates of recruitment reach between 20 and 30% of the total population in reasonable conditions but may be higher if the adult sex ratio is skewed in favour of the females. 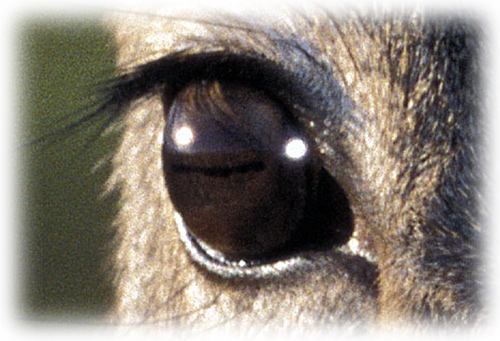 Generally good eyesight with a wide field of view. Colour definition appears to be poor but deer are noted for their ability to detect movement and to see well in poor light conditions. Sometimes seem to have difficulty picking out stationary objects from a background, therefore standing still, even in the open, and allowing deer to approach is sometimes a good way of getting close to deer rather than moving yourself.

Sense of smell is probably the primary sense. Able to discern the scent of individual deer, foodstuffs and human scent (with or without cigarette smoke) over many hundreds of metres (see Stalking Deer guide)
Numerous scent glands. Most have sub-orbital (in front of and just below the eye), metatarsal (hock), and pedal (hoof) scent glands. Some have facial, penile, or other glands. Scent glands help deer to:

Highly discriminating in their sense of taste, together with sense of smell enables selection of the most nutritious food. Deer repellents rely on an acute sense of taste or smell to be effective.

Helps deer to remain sure-footed and to move quietly
Sensitive to cold winds, prefer to avoid such conditions when feeding or laying up .