Warning: fopen(/var/www/vhosts/213/1093152/webspace/httpdocs/bestpracticeguides.ie/wp-content/plugins/wordfence/waf/../languages/wordfence.mo): failed to open stream: No such file or directory in /var/www/vhosts/213/1093152/webspace/httpdocs/bestpracticeguides.ie/wp-content/plugins/wordfence/waf/pomo/streams.php on line 185
 Dog use | Best Practice Guides Dog use – Best Practice Guides 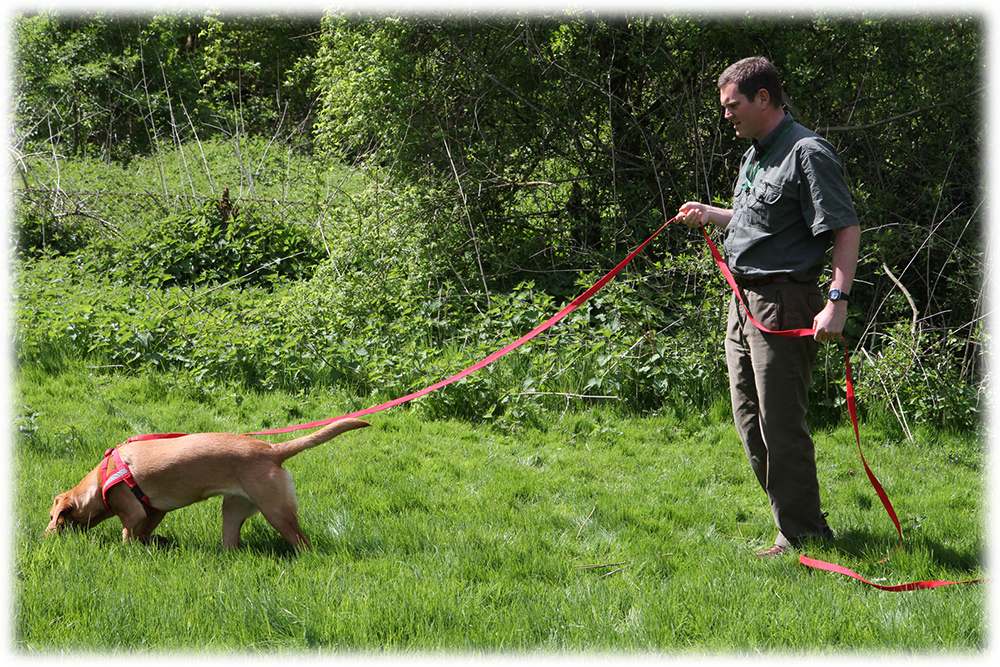 The aim of this guide is to describe the use of dogs as an aid to deer management, particularly the use of dogs for tracking injured deer.
This guide is linked to the “Follow up of shot deer” guide, which should be considered essential companion reading.

Why use a dog?

Many breeds of dog of all sizes can be trained to work with deer. The most common are the larger working breeds and specialist tracking hounds. The breed selected often reflects the stalker’s preference or needs e.g. their domestic circumstances, the species of deer stalked, terrain and type of stalking undertaken. Puppies from working stock with a successful history of tracking deer are likely to be among the best candidates for training. It is recommended that a dog intended for working with deer is initially trained solely for that purpose.

Discipline is essential in any working dog, they should be:- 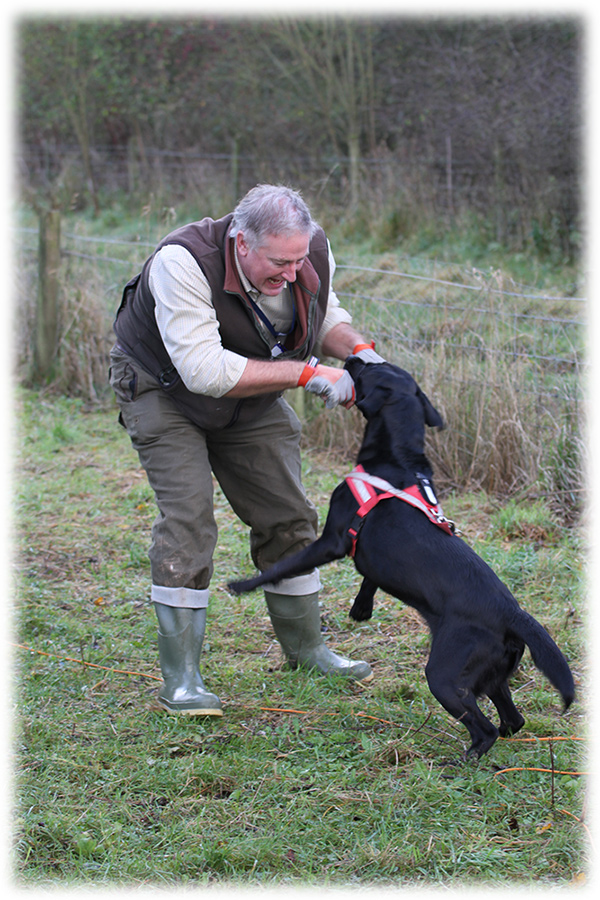 A dog trained specifically for tracking should be capable of accurately following a scent trail, even from a lightly injured animal, that may be a day or more old and over long distances possibly miles/kilometres, (see Legislation below).
Ideally training starts from puppyhood with the young dog being encouraged to follow easy trails using a dragged deer heart/lung/liver or skin over a few meters, moving on to harder trails laid over much longer distances and with an increasing time delay. Training is carried out using a long (10metre) leash, with a collar when very young, then a harness.
The dog should work slowly enough to “indicate” any relevant signs that they find, and at a speed that the handler is able to spot and check these signs. At a year or so old most good dogs should easily be able to follow a 400 m trail, with turns, 3 hours old, and using only 25cl or so of blood. More experienced dogs should be able to follow a much older trail sometimes with no blood at all. Training should be regular, even experienced dogs benefit from reinforcement training.
Handlers too, need experience. They should be able to recognise any information that the dog’s behaviour provides and know how to maximise the chances of a find. Important skills are being able to analyse the “strike” or “shot site” and acting accordingly (See the Follow up of Shot Deer guide), as well as knowing how best to help the dog get started on a trail and if it is lost, to re-locate it. They should also be competent at humane dispatch. 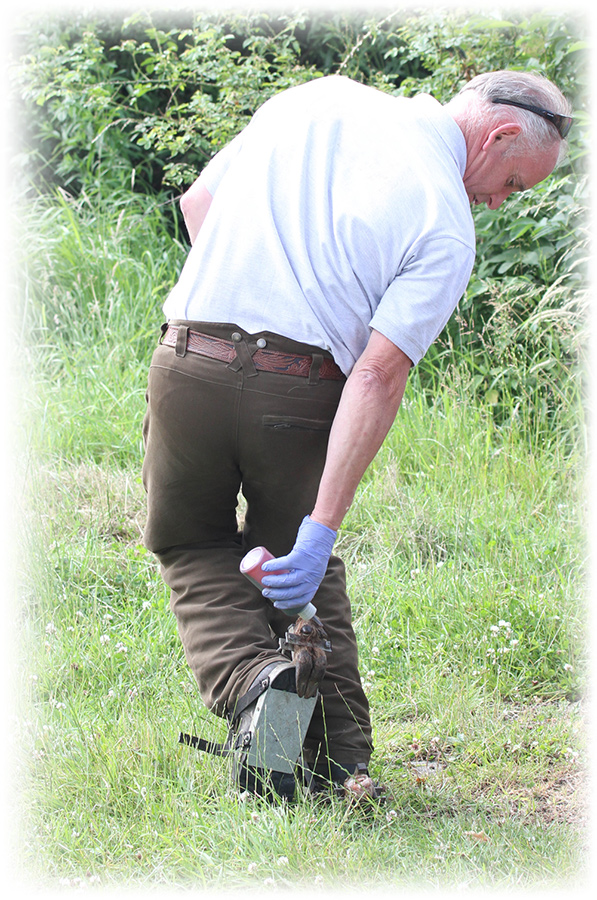 Decision to bring in a dog

All shots taken at deer should be investigated by the stalker (see the Follow up of Shot Deer guide).
If the location of the shot deer is not obvious, the place to start an investigation is the “strike” or “shot site”, i.e. the place where the deer was standing when the bullet was fired.
If a dog is present when the strike is being examined it should be kept a little distance away whilst evidence is being examined.
If, judging from the signs, there is a high degree of confidence that the deer is well shot, it can be tracked by following the blood trail by eye or, if a dog is present, it can be put through its tracking routine as a practice run.
Using a dog to track a shot deer should be considered when: 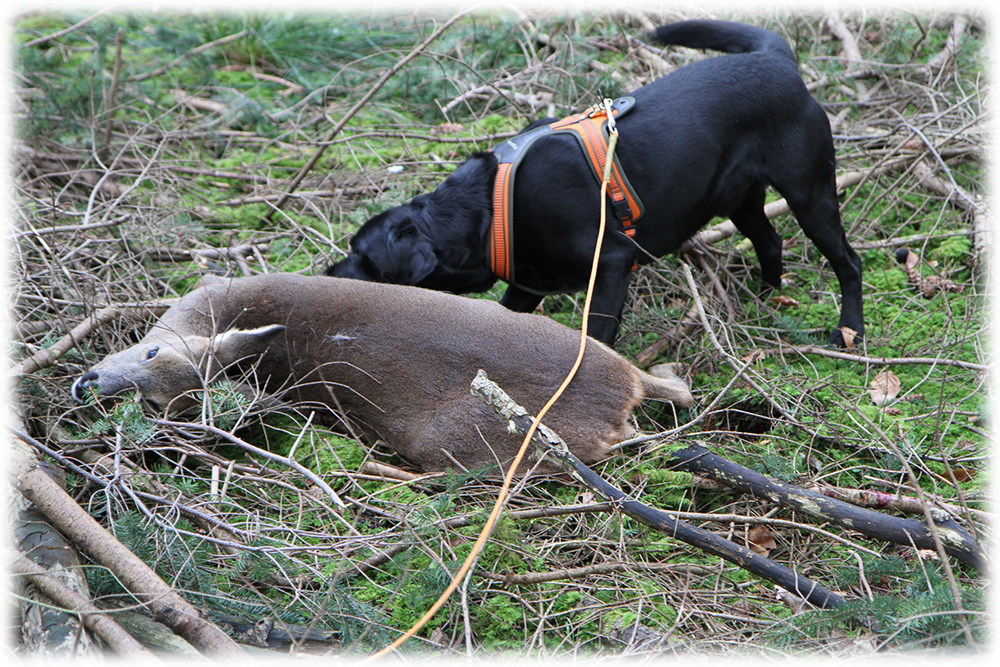 Deciding on how to track the deer

If a shot deer is lost and/or known to be wounded, there is naturally a tendency to want to begin tracking straight away, but time should be taken to decide on the course of action which is most likely to ensure that the animal is found. This may depend on:

Tracking with a dog

The dog is invariably worked on a long leash because the handler has good control, will gain more information from the dog via its behavior, and will have the best chance of confirming that the dog is on the trail.
It should be rare to track injured deer with the dog “free”, off of a leash (perhaps on very open ground or in very dense cover), but the area must be safe and the dog should work the trail at a slow pace, enabling the handler to keep up, to confirm signs and to stay in contact and control. There is a risk that a dog working free will get out of control, chase the target animal or others unbidden, or become lost or injured.
Whenever possible the dog should be introduced to the trail at the strike/shot site. After allowing the dog to get it’s bearings it should lock on to the trail with the handler following carefully on foot.
As tracking proceeds confirmed signs should be marked in case the trail is lost further on and it is necessary to return. The handler must keep a look out for the wounded animal and be able immediately to stop the dog and decide what to do

If the deer is located alive, the preferred method of dispatch is to safely shoot it, taking care that bystanders and the dog are in a safe position. If the deer runs before it can be shot or a safe shot will not be possible, a decision has to be made as to whether to resume tracking or to free the dog to secure the deer. Because of the risk of losing both dog and deer should a chase ensue, or of injury to the dog, releasing the dog should not be attempted unless:

Dogs should not be allowed to maul found deer or carcasses unnecessarily.
Dogs should not be allowed into the deer larder, or the storage area of any vehicle used for transporting carcasses.
Depending on the nature of the wound, time elapsed, and level of carcass contamination, many previously wounded animals may not be suitable for putting in to the human food chain (See the Meat Hygiene suite of guides).

The dog should be kept in good physical and psychological health.
To avoid hearing damage ensure the dog is safely positioned before shooting.
Do not allow inexperienced dogs to tackle live deer off of the leash until they have been trained to hold deer at bay. With all dogs , exercise caution when dealing with antlered deer and large mobile deer.
Inspect dogs for injury after working – particularly for concealed puncture wounds.
Do not allow a dog to run free where it is likely to get lost or run into or cause a danger e.g. near a road.
GPS and radio collars for finding dogs are available but have relatively short range. If the dog is wearing a collar while working, it should be of a design that will either come off or break should the dog become firmly attached to an obstacle. You are not obliged by law to put an identification collar on a dog while it is being used for “sporting purposes”, which includes tracking deer.
Micro-chip and register the dog to allow it to be traced, even if its collar is lost.

The principal legislation dealing with dog ownership, licensing and control of dogs comes under the Control of Dogs Act 1986, as amended by the Control of Dogs (Amendment) Act 1992. A new system of compulsory microchipping of dogs was introduced in 2015 – S.I. No. 63/2015 – Microchippng of Dogs Regulations 2015,

Dog welfare is covered under the Protection of Animals Acts 1920 and 1965.Persons can be disqualified from keeping a dog if convicted of cruelty to a dog under this legislation”

Trackers should be aware that without obtaining permission to enter land with a dog in pursuit of a wounded deer (hunting), and / or to carry firearms on land without authorisation is an offence under Section 44 of the Wildlife Acts 1976-2012 (as amended). There may also be an issue of carcass ownership if an animal crosses a oland ownership boundary.

There are a number of dog tracking organisations in the UK, a number of whom provide information, training and a free call out service for recovering wounded deer.