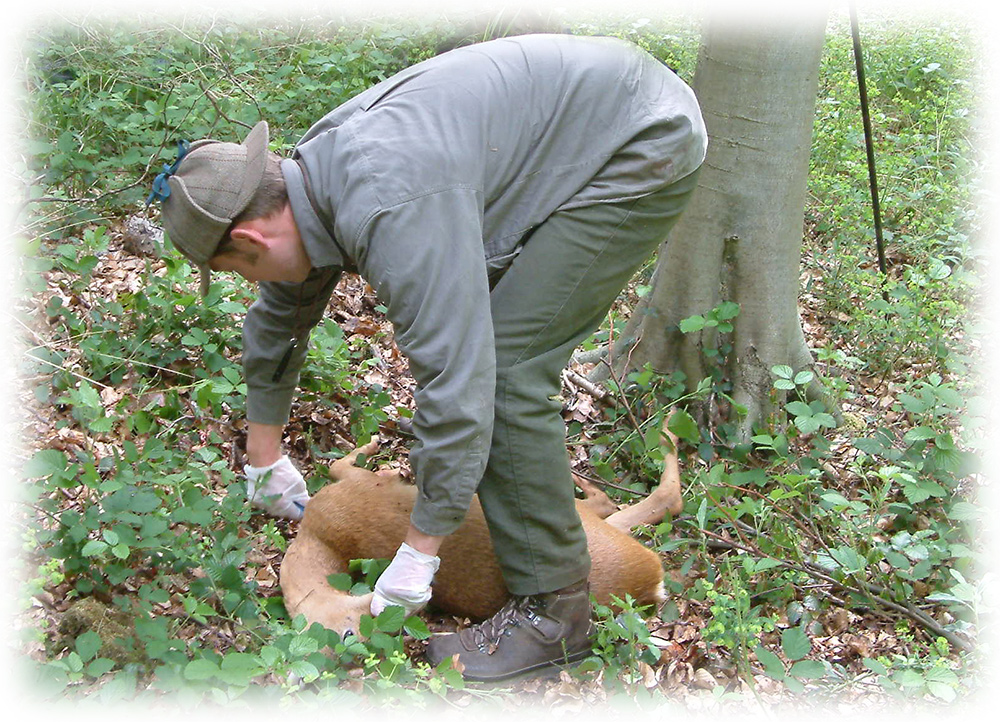 From the moment it is culled a deer carcass needs to be treated carefully on it’s way to becoming food. One of the first steps in the process is the gralloch, during which part of the meat hygiene inspection process also takes place. Gralloching is followed by further lardering to bring the carcass to the “primary product” or “in skin” stage for storage prior to processing the carcass into venison. The aim of this guide is to provide practical guidance on the initial stages of preparing a carcass immediately after the deer has been shot. The same result can be achieved by many means but the key goal is a process which minimises damage and contamination. A second “Lardering” guide describes the final stages of in skin carcass dressing. This guide also links to Carcass
inspection, Extraction and Transport, Basic Hygiene and Larder Hygiene and Safety guides.
The purpose of gralloching is to:

Some or all of the equipment listed below will be required at the gralloch. It should be clean, in useable condition and to hand before the gralloch is begun.

The gralloch should take place as soon as possible after culling, preferably immediately. There is a small window of time during which an intact carcass will remain in perfectly good condition, an hour or so in cool conditions (say 10ºC or less) but a little as 15 minutes on hot days exposed to the sun. If the gut is damaged these times will be greatly reduced.
The place at which the gralloch is done will vary according to the prevailing conditions and facilities available. Ideally the whole process would be carried out in a deer larder but commonly it has to be done where the animal was shot, although it is sensible to perform the gralloch away from very public areas. All or part of the gralloch might have to be done on the ground, but smaller carcasses might be suspended if there is a suitable place to do so.

The process of gralloching can be split into a number of different tasks, each of which is described below as if the gralloch was being carried out with the animal on the ground. The order and precise way in which the tasks are carried out will depend on the facilities available, the specific situation and personal preference but the end result should always be the same – a hygienically dressed carcass. Best practice would be to do the minimum in the field,completing carcass dressing in the controlled environment of a deer larder. It is accepted however, that because time is of the essence in preventing contamination, the procedures described here often have to be completed in the field. Where practical a suspended gralloch may prove the most hygienic in these situations.

This is always the first step. Approach the deer cautiously and confirm death by checking for lack of eye reflex when the eye is touched.

The inspection process begins at this point and will continue throughout until carcass preparation is complete ( see Carcass Inspection guide).
In rare cases, at this stage it may be that the carcass is so obviously diseased or unfit for human consumption that you decide to abandon the gralloch at this stage and dispose of the carcass (see By-product Disposal guide).

See figs 2-4. Bleed the animal as soon as possible, and where it fell unless it is appropriate to move the carcass away from areas of public access.
With the animal on it’s back or side, insert the knife immediately above the breast-bone, pointing toward the heart, so that it penetrates the chest cavity. Work the blade to either side and remove, the blood should flow freely. This is known as thoracic bleeding. Blood flow can be aided by bending the foreleg back at the knee and pressing it hard down onto the rib cage.
If it can be done without risk of contamination, the carotid arteries and jugular veins on both sides of the neck could be also be drained by cutting them just behind the jaw, but on balance this is usually best left until in the larder as a consequence of removing the head.

See figs 5-7. From the bleeding incision, make a cut along the centre of the neck to expose the windpipe (trachea), behind which is the foodpipe(oesophagus).
Separate the foodpipe, squeeze any contents back towards the stomach, then cut it close to the head. Scrape off surface flesh from a short length and knot it to prevent leakage of stomach contents into the chest cavity when removing the gut later. Free any connective tissue where the foodpipe enters the chest, this makes it easier to remove later. Lay the foodpipe back in the neck, not on the ground. If you are concerned about environmental contamination e.g. when dragging a large carcass, make the cut only as long as is necessary to tie the foodpipe.

With the deer on its back, and, taking care not to puncture the intestines or stomach, make an incision either:

A gut hook can be used after making the initial incision, if preferred.

fig 11. To keep the rear end intact – having opened the stomach cavity, empty the intact rectum by squeezing any pellets first out of the anus then back toward the stomach. Then, leaving sufficient length to tie a knot, break or cut the rectum and tie it, leaving the knotted end in the carcass, to be removed in the larder later with the anus. Lay the end of the rectum still attached to the intestine outside of the carcass.

Variant fig 12.: Core out the rectum by cutting inside the walls of the pelvic girdle around the anus (and vulva, in females) to free the rectum etc. In males the pizzle will need to be freed first. Keeping tension on the skin will make the cuts cleaner and easier. Push any faeces out of the anus by squeezing the rectum as soon as you have made the first cut..
Take care not to push the knife inside the pelvis too deeply as you are likely to puncture the bladder. Having emptied and broken the rectum inside the gut cavity, the freed parts should be pulled backwards out of the pelvis not forwards through it. This method exposes more of the carcass to potential contamination than keeping the rear end intact and dealing with it in the larder.

Turn the animal on it’s back or towards its right side. If there is a well developed foetal sac remove it by reaching as far into the pelvis as possible, pinching the vagina and cutting it. Avoid damaging the bladder.
Find the spleen. It is attached between the upper left side of the stomach and diaphragm. Break the connective tissue between the spleen and diaphragm leaving the spleen attached to the stomach. Remove the gut to the right hand side by pulling out first the intestines then the stomach, breaking any connections as you go and leaving behind the liver and diaphragm with the foodpipe passing through it. The kidneys can be removed and inspected at this stage or later in the larder. Try to keep the intestine clean to aid inspection.

Hold the foodpipe (still attached to the gut) where it passes through the diaphragm and slide your hand towards the heart to free any connections. Still holding the pipe as far forward as possible, apply a steady pull to draw it carefully back through the diaphragm without breaking it or unravelling the knot. The intact gut can now be inspected.

Ideally the carcass will now be transported back to the larder, see the Extraction and Transport guide. The next steps are dealt with in the Lardering guide