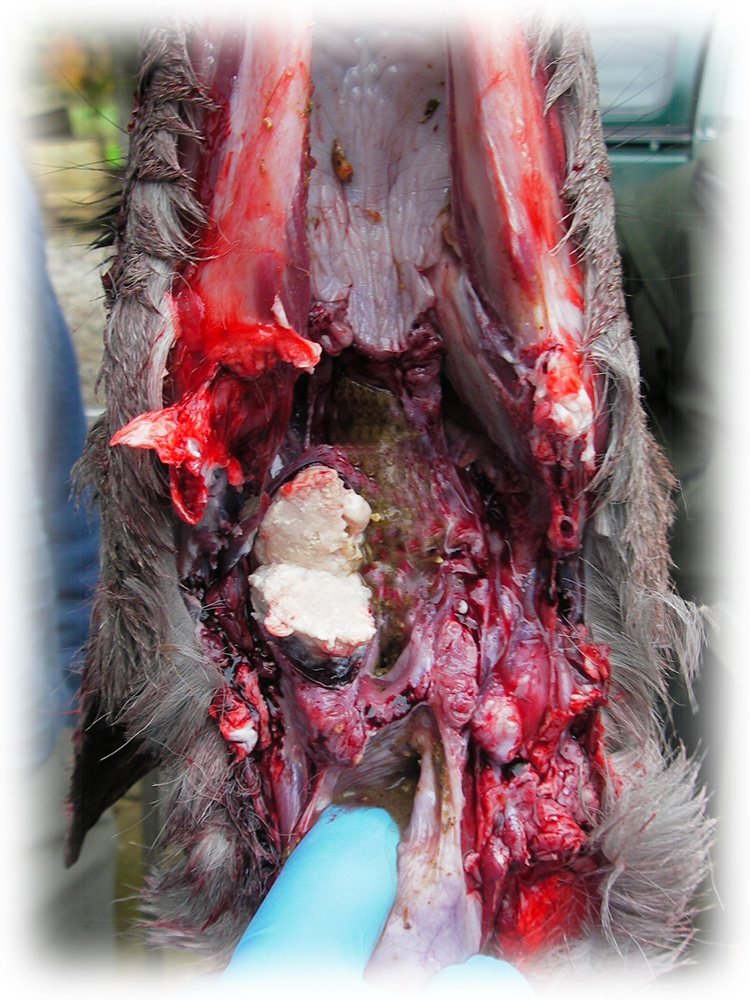 enlarged retropharangeal gland (incised for clarity), this abscess is of the “hard, cheesy” type

The purpose of this guide is to describe Bovine Tuberculosis in deer and how to deal with suspect infected carcasses.
This guide links to the Deer Legislation and Carcass Inspection guides.

Bovine TB (bTB)is a notifiable disease as named in the Diseases of Animals Act 1966. Suspected cases of  bovine TB should be reported to the local District Veterinary Office (DVO).

bTB affects domestic livestock, mainly cattle, which are its natural host, as well as wild mammals such as badgers and deer and very occasionally, humans. It is caused by Mycobacterium bovis, one of a closely related group of bacteria that includes M. tuberculosis (the primary agent of TB in humans). Both of these are part of a larger family of bacteria many of which are harmless; others are responsible for diseases such as human leprosy, Johne’s disease in ruminants and avian TB (tuberculosis of birds).

There is still some uncertainty surrounding bTB and the way it is transmitted. Bovine TB is spread primarily through the exchange of respiratory secretions between infected and uninfected animals. This transmission usually only happens when animals are in close contact with each other. Thus, animal density plays a major factor in the transmission of M. bovis, including temporarily increased densities that may occur around supplementary feeding areas. Bacteria may also be released directly onto feedstuffs through coughing etc., the infection is then ingested orally. Infection can persist in the soil for some time but does not spread over long distances through the air.

A recent study on the prevalence of bTB in a sample area in Co Wicklow with a high level of reactor cattle showed an incidence of 16% positive for the disease out of 130 wild deer tested. 5% of the total showed visible lesions.

While the indication is that at present the majority of infected wild deer populations both here and in the UK are most likely to be acting as spill-over hosts of M bovis, reflecting the presence of bTB in an area rather than acting as a reservoir of the disease in cattle, the situation is currently under review by the Department of Agriculture veterinary section. Infected deer are more likely to pass on bTB to other deer, but any infected animal of any species may shed infection and this risk is increased when deer are at high densities. Any measures than can help avoid these high densities should be beneficial. Deer stalkers and managers should take disease risk into account when establishing management programmes.

Bovine TB is a chronic disease and it can take years to become infectious and/or develop clinical signs following infection.
Live deer often show no outward signs of infection but animals with advanced disease may appear emaciated, have diarrhoea or may just be quiet and unwell.
Internally, TB abscesses may be very variable, from small, hard and “gritty” to large and fluid. Commonly the lymph nodes, particularly the mesenteric, sub-maxillary and retro-pharyngeal nodes are affected. In advanced cases many different lymph nodes can be affected and there may be abscesses or visible lesions such as adhesions, particularly inside the chest and on the lungs. Enlarged lymph nodes and abscesses can also be indicative of a number of other diseases, but the possibility of bTB should always be considered. Lymph nodes should not normally be incised to check for infection. It is not of great concern if a node is cut accidentally; however, sensible personal disinfection and hygiene procedures should be followed.

Initially, isolate suspect carcasses from others to prevent contact. Provided it is otherwise healthy and in good condition and there is no other reason to retain it, a carcass from which samples have been removed can then go into the food chain as normal. If the carcass is delivered to an AGHE the details of any abnormalities must be provided with the carcass, as required by the Wild Game Meat Regulations

If you find a suspect carcass continue processing/taking samples with care. Wear protective clothing that you can wash immediately, have appropriate disinfectant to hand and wear rubber gloves.
If sensible precautions are taken when handling a suspect carcase the risk of transmission is very small.