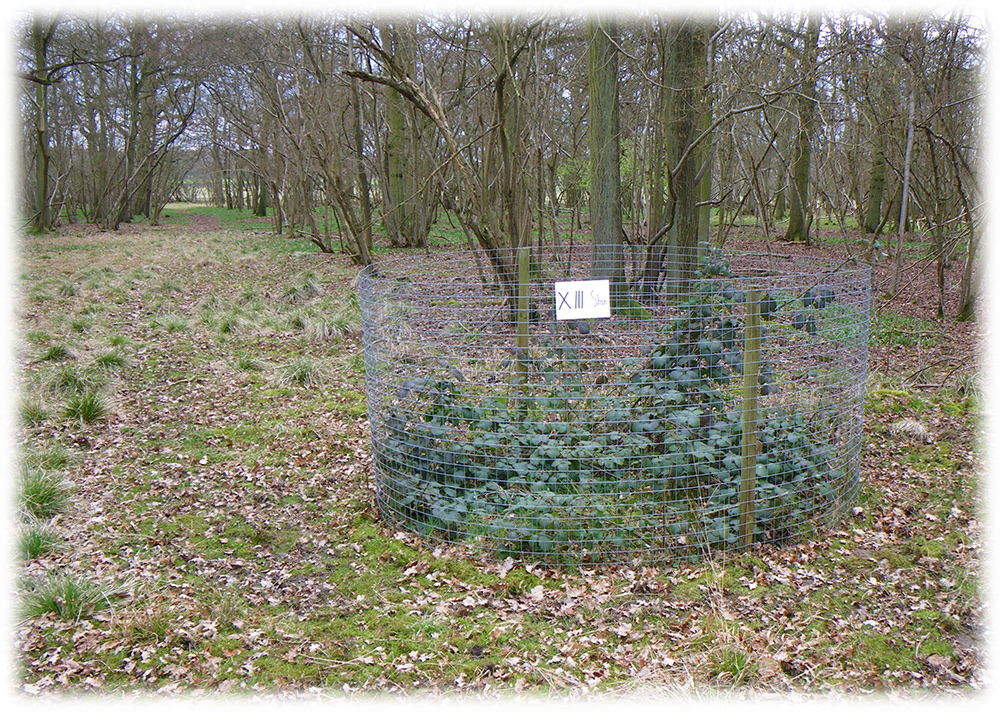 Deer are dependent on the habitat in which they live and at the same time they have a variety of impacts upon it.
Deer can be responsible for helping to create a variety of levels of open space in a habitat and this can have a positive influence on biodiversity, but where deer impacts are too extensive the effect is nearly always negative.
This guide describes how deer can impact habitats, and the significance of such impacts. It is mainly relevant to woodlands but the principles can be applied to many other habitats. It links to the Woodland Impact survey, Deer Species Ecology, Deer Signs, and Cull Planning guides.
Causes of impact
Browsing and grazing are the most important ways in which deer cause impacts. By eating leaves, shoots and flowers, deer can affect the ability of plants to grow, spread or even survive.
Fraying or bark stripping causes physical damage to field layer (up to 2 metres high) plants, and trees. Such damage may kill plants, encourage plant diseases or degrade quality.
Trampling by deer is worst at high deer densities. When following their paths (racks) or in heavily used areas such as rutting stands, deer can affect woodland plant growth by changing the surface soil structure or damaging surface roots.
Deer dung is a nutrient source which may favour some plants over others. Dung is also a means of seed dispersal.

The impact that deer have varies due to habitat type and plant species
Because deer tend to be selective about what they eat and where they spend their time, certain plants, habitats or areas within a habitat, may be impacted more than others.
In woodlands, plants such as Ivy, Bramble and Ash are favoured by deer. Other plants such as Bracken, Ground Ivy, Wood False Brome, Wood Rushand Pendulous Sedge are usually avoided and may actually increase when deer impacts are intense. Some grasses are relatively tolerant of grazing and may come to dominate in heavily grazed areas.
On lowland heaths deer may selectively take heathers and sweet grasses but, depending on what else is available, sometimes ignore or cannot keep up with invasive species such as Birch and Purple Moor grass.

Each deer species may have subtly different impacts on the same habitat, for instance some woodland flowers and their leaves are commonly eaten by Muntjac.
In woodland the height of the browseline can vary depending on which species are present.
Territorial species such Muntjac usually occupy an area all year round, their impact being more or less constant. Herding species like Fallow can be more unpredictable, sometimes not visiting an area for months, then appearing in large numbers, causing damage.
Certain types of impact such as intense bark stripping are caused mainly by the larger deer species.
Where there are more than one deer species present the overall impact may be intensified, for example, in combination, Fallow and Muntjac at high densities seem to have a particularly significant effect on woodlands.
Any deer management plan aimed at reducing impacts must take the deer species and its behaviour into account. (see Deer Species and Cull Planning guides) .

At low deer density a habitat may not show any visible long term impacts and there may be some positive effects, for example the presence of deer can diversify habitats by creating open areas or controlling plants that would potentially dominate others (e.g. bramble).
At medium density it is likely that some plants will be impacted more than others and some long term changes might be seen both in plant diversity, plant dominance and possibly in woodland structure.
At high densities deer can seriously impact a habitat and in the long term can reduce the success of some plants, or even eliminate them. For instance, in woodlands deer can reach such high densities and for such long periods that woodland ground flora can become impoverished and the woodland structure compromised. Tree regeneration may be completely prevented and there can be a knock-on effect on other wildlife such as some birds and butterflies because of the reduction of critical plant species and deterioration of the shrub layer.
In addition the capacity of the woodland to support deer may fall, causing the deer to rely more and more on feeding outside of the woodland, causing increasing impacts there.

Impacts might only become obvious over a period of years ( e.g. a long term decline of flowering plants, or occur over a very short time e.g. bark stripping caused by a large group of deer which are not normally resident.
Where deer have had a long term impact on a habitat it may not always return immediately to what it was in terms of plant species composition and success of individual plant species, even if the deer pressure is reduced or removed.

The perceived significance of deer impacts may vary according to the habitat management objectives for the area, what is tolerable in one case, may not be in another. It is important to recognise that whereas visually obvious impacts such as occasional fraying may not be really significant, other impacts may be less obvious or harder to measure, but nonetheless significant in the long term. An example would be intensive browsing which can lead to the gradual simplification of woodland structure, or the grazing of flowering plants which can lead to smaller plants with fewer or smaller flowers.

The herding species particularly, range widely, often on a landscape scale. A high density population which feels secure in one area, for instance an area where no culling takes place, may well use that area as a base from which to “raid” other areas with a more attractive food source. Alternatively it may be that a vulnerable area (such as SAC or NHA woodland) suffers harmful impacts from a density of deer that can otherwise be tolerated in the wider landscape.
Occasionally, what is seen as undesirable impact on one side of a boundary is acceptable on the other. If an owner working to one set of objectives decides to reduce deer density but others around them do not, there may either be a degree of infill (immigration) from the neighbouring populations, or conversely, deer culling activities may cause deer to congregate on a neighbours’ ground, causing unexpected impacts there.
In all such situations cross-boundary cooperation should be considered when planning deer management.

Where deer impacts are likely to be a significant part of deer management planning, it is important to measure the level of impact, initially to establish baselines, then to continue to monitor to detect change as an aid to making deer management decisions. Descriptions of the more common forms of impact are given in the Deer Signs guide and a method for measuring deer impacts in woodlands is described in the Woodland Impact Survey guide in the Associated Information section of this series.
References to measuring impacts in habitats other than woodland can be found at the SNH Deer Best Practice site listed below. as currently there are no IDMF Best Practice Guides on this subject